The History of SE9

Historical information and photographs are available at Greenwich Heritage Centre.
The information below is courtesy of IDEAL HOMES: SUBURBIA IN FOCUS - A joint venture of The London Boroughs of Bexley, Bromley, Greenwich, Lambeth, Lewisham, Southwark and the University of Greenwich.
If anyone has more information or photographs about any particular building or the area in general which could be included, they would be appreciated.

Eltham is an attractive suburb, which has developed along part of the old road from London to Maidstone.

The opinion of place name scholars is divided. It could mean "Homestead or river meadow frequented by swans" or from an association with a man named "Elta". The latter Anglo Saxon derivation is currently favoured.

On a high, sandy plateau with fine views it also had a strategic significance, which led to the creation of the moated Plantaganet palace of Eltham. Convenient for monarchs travelling to and from their French territories it became a favourite home of Plantaganet kings and queens. The two main surviving structures at the Palace: the great hall and the moat bridge were built towards the end of the 15th century.

The Tudors and their successors preferred the riverside palace of Greenwich and neglected Eltham. Eventually, after the ravages of the Civil War, the palace was used as a farm and the Great Hall became a barn. The palace's three parks, Great Park, Middle Park, and Horn Park were stripped of their timber for shipbuilding. Two of the parks became farmland but the Great Park was leased by Sir John Shaw, a financier who supported the restoration of Charles II. Shaw built himself an elegant mansion (Eltham Lodge) in the park. The Lodge is now the headquarters of the Royal Blackheath Golf Club and the former royal park is a golf course.

It wasn't until Stephen and Virginia Courtauld moved to Eltham in the 1930s that proper restoration of the surviving structures was carried out. Adjoining the Medieval Great Hall, the Courtaulds built their astonishing mansion with its remarkable Art Deco Hall.

Close to the palace beside the road to Woolwich was the medieval estate of Well Hall, which was also moated. The main house, of which no record survives, stood in the centre of the moat. It was here in the 16th century that William Roper lived with his wife Margaret, the daughter of Sir Thomas More. More, who must have been in residence in the Lord Chancellor's Dwelling at the palace often, may have been a frequent visitor to Well Hall.

The later Well hall House was home to the bohemian Bland family, Hubert Bland and Edith Nesbit, from 1899 to 1921. The large dilapidated house, its moat and grounds were an inspiration to Edith Nesbit when writing her children's books.

The village street adjacent to the palace and the surrounding land remained rural until Archibald Cameron Corbett bought the Eltham Park Estate and developed it with well-built suburban housing between 1900 and 1914.

Corbett's estate, the opening of two railway lines through Eltham, and the construction of the Shooters Hill by-pass (Rochester Way) were the main stimuli for a flood of further private building in the inter-war years. In addition, in 1915, the government built the extremely attractive Progress Estate, and large estates of temporary hutments to house the vastly increased numbers of workers in the Royal Arsenal at Woolwich.

The local authority also played their part in changing the face of Eltham. In 1923 the Woolwich Borough Council built the Page Estate and, later, the Council built the Middle Park (1931 - 1936) and Horn Park Estates. Building work on the latter estate, begun in 1936, was interrupted by World War II but continued through the 1950s. These two estates were built on two of the former hunting parks of Eltham Palace. Finally, in 1947, Coldharbour Farm on the border with Chislehurst was acquired and the large Coldharbour Estate was built. 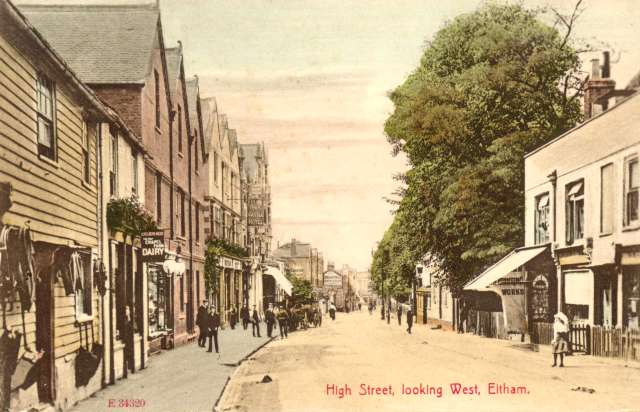 Increasing road traffic and suburban development of Eltham's farmlands resulted in the widening of the High Street and the demolition of many ancient buildings.

Historically Mottingham was an extra parochial district attached to Eltham, the name being first recorded in 862AD as Modingahema meaning the land of Moda's people, sometime interpreted as “the proud place”.

In historic times the main settlement lay along what is now Mottingham Lane, where large houses such as Fairy Hall and Mottingham House could be found. The rest of the district was farmland.

The arrival of the railway at what was initially called Eltham station in 1866 (later renamed Mottingham) was the first spur to development and small cottage style houses began to spread along what is now Mottingham Road, the first shops appearing at “The Terrace” in the 1860s. More upmarket houses began to appear in the 1880s when West Park was laid out. These houses have proved very successful and are still popular today. 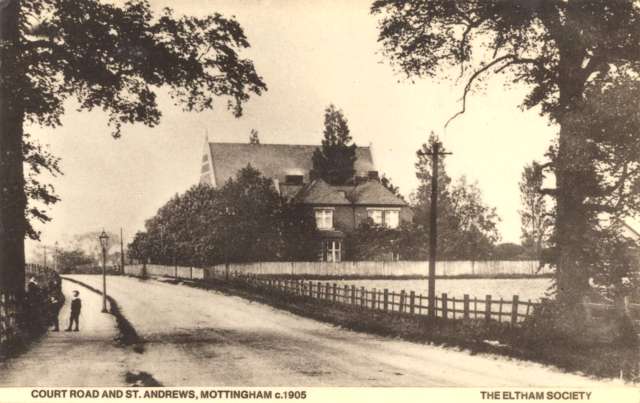 St. Andrew's, Mottingham's first church opened in 1880 in the fields between the station and the village. It was not until after the First World War that this area lost its rural nature, primarily the result of the opening of the Sidcup Arterial Road in 1923, which improved road journey times to London and became a catalyst for ribbon development.

At the beginning of the 1930s the London County Council bought the Court Farm estate and began the building of the 2000 home Mottingham Estate; the first houses were occupied in 1935. The estate was fairly self-contained with a sizeable shopping centre and several schools.

After the war Woolwich Council began the Coldharbour estate to the east of Mottingham Road. Built on the last remaining farmland in the L.C.C. area, it was created primarily to provide accommodation for local people made homeless by the blitz.

New Eltham grew up as a suburb of farmland to the south of Eltham in and around the small hamlet and crossroads of Pope's Street. 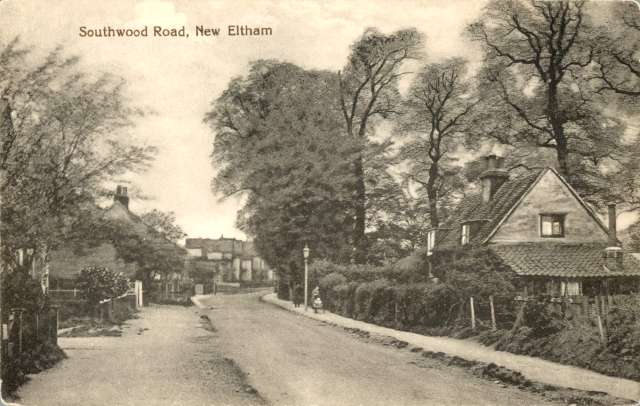 This is a 1920s postcard view looking towards Green Lane from the junction with Gerda Road.

by Gaynor Wingham (edited by)