The History of SE9

An article by Michael Howard Stevens.

Englishmen have always made the best Americans. Charlie Chaplain, Cary Grant for example, but there is no better instance than that epitome of Americanism, long-time comedian, entertainer and friend of countless US presidents, Bob Hope. Such a legendary American is Bob Hope that few Americans have any idea that he is an Englishman. His legend is also such that many people both sides of the Atlantic were surprised to know that he was still alive, when recently we were reminded of this as he prepares to celebrate his 100th birthday.

Born in Eltham on May 29, 1903, he was christened Leslie Townes Hope, the son of William (Bob) Henry Hope a stonemason of Eltham and a Welsh mother, Avis Townes. Avis' background is unclear but it has been said she was a music hall singer. The family, which also included Bob's older brother Fred, left England for America when, according to Bob, he found out he could not be king!

Bob's career started in earnest when he appeared in a comedy duo as a supporting act to Fatty Arbuckle, but Bob made the big-time in 1933 in the Broadway musical "Roberta”. It was during this time he met and married a co-performer in "Roberta”, Dolores Reade. Bob and Delores are still married and have four children, Linda, Anthony, Nora and Kelly. 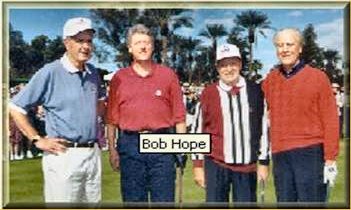 The "Guinness Book of Records" cites Bob as the most honored entertainer of all time. The US of A and Eltham can both be proud.

The author can be reached at michaelhowardstevens@earthlink.net

He is another English American. Born in Aylesbury, schooled at the Royal Latin Buckingham and London University, he spent much of his younger years as a Chartered Accountant in the city of London, taking articles with Wright, Stevens and Lloyd and later working for Deloitte Touche. In 1983 he moved to Houston, Texas where he worked for several oil services companies. He now lives a hermit's life high in the Santa Rosa Mountains of Southern California, not far from Bob Hope's mountain home that overlooks Palm Springs.

The following is reproduced from a newspaper article published on Saturday 23rd May, 1998, when the house was put on the market.

The London birthplace of Bob Hope, which has no indoor bathroom, is on the market at £86,000

A piece of entertainment history has gone on the market - the London house where comedian Bob Hope was born.

The world famous comic, who was knighted earlier this month, was born in a humble terraced house in Craigton Road, Eltham, south London in 1903.

The three-bedroom house has changed little since then. There is no bathroom and the only toilet is outside, but local estate agents Harrison Ingram are asking £86,000 for the property.

The property details say: "Your chance to buy a character home which boasts a former resident of character - and what a character! "The birthplace of Bob Hope - a three-bedroom Corbett house is for sale but full modernisation is required - of the house, that is!" Agent Paul Harrison said: "We put it on the market two weeks ago and quite a few people have come to view it.

"We have had an offer but it is lower than the asking price and it has not been accepted." Mr Harrison added: "There has been a lot of media interest - both in this country and in America, but I don't really think anybody would buy the house specifically because Bob Hope was born there. "Houses around the area normally go for about £95,000 but this needs a lot of modernisation. "The offer we have had has come from a local man who wants it as a family home." There is no evidence in the house of its famous former resident, although the deeds do boast the names of the comic's parents and photographs exist of the young Bob outside the home.

Bob Hope, the son of a stonemason and charwoman, was christened Leslie Townes Hope and left London for America when he was just four years old. But the south Londoner who rose from an immigrant shoeshine boy to become an American institution never forgot his humble roots.

In 1984, when in Britain to open the Bob Hope Theatre in Eltham, he returned to his former home and posed for pictures with owners Jack and Florence Ching. The couple - Mr Ching died in 1988 and his widow died just a few months ago - lived in the house for more than 60 years. Mr Hope, now 94, and suffering from failing eyesight and hearing, was awarded an honorary knighthood at the British Embassy in Washington on May 17. He became a radio star before making more than 50 films and entertaining American and British troops during several wars.

The comedian, who celebrated his 100th birthday at his home in Hollywood four weeks ago, was born in the terraced house in Craighton Road, Eltham, on May 29, 1903.

The three-bedroom house, which boasts a British Film Institute plaque on the wall, was snapped up by the first viewers when it went on the market again after five years.

Agent Paul Harrison said: "We had 10 people coming to see the house. The first couple said they wanted it as soon as they walked in.

"They're a young couple. They're buying the house because it's a good residential area and, although they don't have any children, are planning for the future. Gordon Primary School is nearby and has a very good reputation.

"They like the idea of Bob Hope being born here. But that's a dinner party talking piece more than anything else."

The Bob Hope Corporation was considering purchasing the property to store Bob Hope memorabilia, but his daughter, Linda, thought that in a residential area it would be unfair. 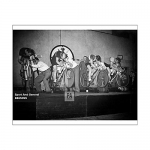 Buy from The History Press >>